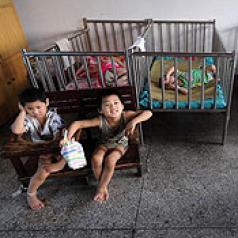 Six orphanages were found to have been buying babies who were then adopted by families from other countries. One of the convicted middlemen in that case is now out of jail. He and his mother spoke to our China correspondent, Marketplace’s Scott Tong.

SCOTT TONG: As Chen Zhijing tells it, her family stumbled into the baby-selling business.

In the late ’90s, she worked at an orphanage in Hunan province, and every so often, she would find a baby abandoned on a street corner, or at a bus stop and bring it to the orphanage.

Chen would get maybe a dollar to cover her travel costs. But then, around the year 2000…

At that time, China’s international adoption program was booming. In 2005, the government decided to approve more adoption requests than ever before. Nearly 8,000 hopeful families came from the U.S. alone that year. For each baby, an orphanage gets $3,000 from the adopting parents. That’s Chinese policy.

Duan Yueneng: We sold babies to orphanages. Others did, too. They bought them because foreigners wanted them, and then made big profits when the babies were adopted.

To meet the demand, Duan says he enlisted his wife and sisters to locate more babies. They started buying infants from a supplier in Guangdong province 600 miles away. They say this woman systematically collected unwanted babies from local hospitals.

The babies were then transported by train to Hunan. But it all ended in late 2005, when Duan and his family were arrested and convicted on charges of trafficking 85 infants. Duan got five years in jail. He’s just out. His wife got eight years, his sister 15.

Duan shows us court papers, documenting his baby trade: receipts, bank transfers, orphanage logs. They’re consistent with his claim that his family sold far more than 85 infants; he reckons he trafficked 1,000 or more. Duan says the orphanages falsified foreign adoption papers for each of the trafficked babies.

In China, every orphan has a file — listing where it was found, when, and by whom. Duan says in many cases the babies were not found locally, as the adoption papers say. They were bought from far away. The documents we saw indicate at least one went to American parents.

Yueneng: Sometimes the orphanages listed my sister as the finder, or they just put down a fake name. For Americans who adopted babies, let me put it this way: When were the kids really born? Who really found them?

Duan makes no apology for selling babies. The money, he says, encouraged him to deliver kids to orphanages, and to a better life.

Brian Stuy rejects that argument. His company, Research China, investigates Chinese orphans and their history. Stuy says the money orphanages get paid for each adoption invites corruption. Three grand in China, he says, has the buying power equivalent to $40,000 in the States.

Stuy says baby selling is systemic in China, and he says it’s still happening today. He just investigated 20 kids from one orphanage, and he says in more than half the cases…

Stuy: The information as it relates to their finding was fabricated. Everything about the origin of the child was fiction.

We got one orphanage director on the phone. She told us she’s willing to pay $150 for a healthy baby girl. Chinese media report at least 88 baby trafficking convictions since the Hunan trial. But many parents and social workers in the U.S. say that trial was an aberration in China’s otherwise clean program.

Chuck Johnson represents adoption agencies at the National Council for Adoption in Washington.

CHUCK Johnson: China is considered one of the premier inter-country adoption programs. They have a very strong system of laws and an extremely involved, authoritative central authority.

Johnson says China’s adoption ministry — the CCAA — investigated the Hunan scandal, and according to its findings…

Johnson: None of the children were adopted by American families.

That seems to conflict with the court documents we saw, which indicate that at least one was. Johnson’s response…

Johnson: I’m not going to comment on that because I have not seen the documents. And also, we’ve had to rely on the investigation completed by the CCAA.

So we tried to contact the CCAA on this. It didn’t respond.

American Cathy Sue Smith in Shanghai sometimes wonders where her adopted daughter was really born. She discovered through DNA matching that her 8-year-old Janna Mae has a biological sister. And here’s the thing: the blood sisters were adopted from different provinces, Hunan and Guangdong. The exact route used by the Duan family trafficking network.

CATHY Sue Smith: It adds to the whole possibility of trafficking.

Smith knows her daughter is not the child court documents show as having been trafficked by Duan. That girl went to another American family. But Smith says she’s not surprised by these goings on. She’s been in China nine years. Long enough, she says, to know rules get bent.

Source:  The dark side of Chinese adoptions

(Did you know that in adoption, a child can be classified as an ‘orphan‘ even if they have a surviving parent? See here for video.)