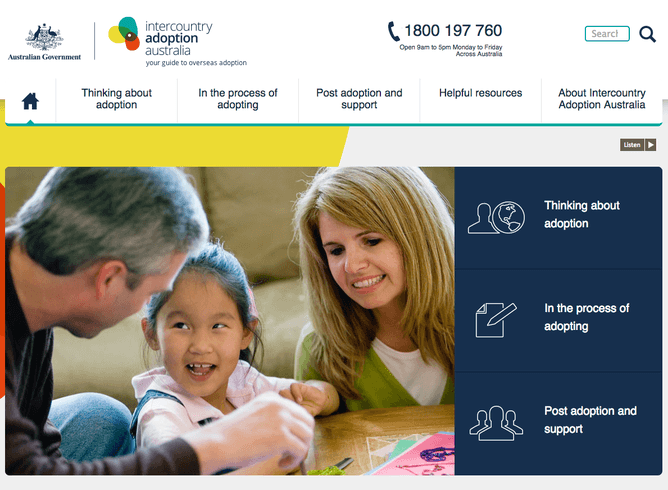 “Parents are targeted by recruiters and children are bought or stolen or sold.”

Imagine for one moment your child went missing. It’s a common enough event worldwide for today, May 25, to be declared International Missing Children’s Day. Surely you would expect no stone to be left unturned to find your child – even if took six months, a year, or two.

Last week, Prime Minister Tony Abbott launched a new government agency and website promoting intercountry adoption, and repeated the dubious claim that “there are millions of children in overseas orphanages who would dearly love to have parents”. It’s part of a multi-million-dollar service for prospective and adoptive parents intended to speed up adoptions of children from overseas.

The website rehashes what prospective and adoptive parents already know through state and federal departments. There is no information for adult intercountry adoptees, no additional post-adoption support, no research publications – apart from the Australian Institute of Health and Welfare yearly reports – and no information about who is staffing this call centre. All in all, it’s a costly exercise for not much return.

The same pressures we see operating in Australia are more intense at the international level. For over 60 years the focus of many national governments and adoption agencies has not been on re-uniting children with their families. Instead the aim has been to adopt children as quickly as possible.

Over the years many cases have shown that even when families do find their children they are not returned once separation is made permanent through adoption. These cases become more complicated, adversarial and unresolvable the older children become.

According to the Convention on the Rights of the Child and the subsidiarity principle in the Hague Convention on intercountry adoption, children have a right to be raised by their families, families are entitled to support, and suitable in-country alternative care must be provided.

Where intercountry adoption is an option, re-unification is usually not extensively pursued if at all. Not finding the child’s family, or failing to provide families with support, turns on the green light for adoptions to proceed. Children become “abandoned” or “orphans” on paper for this purpose.

The risk is that influential parties who support speedier and easier adoptions will use the Hague meeting in June to push for time frames that will effectively extinguish re-unification possibilities and legitimise unnecessarily speedy processes.

Searching and re-unification are time-consuming and resource-intensive. But these processes are not impossible and are undertaken by some international and smaller organisations. An Australian adoptee was even able to find his own family in India using Google Earth.