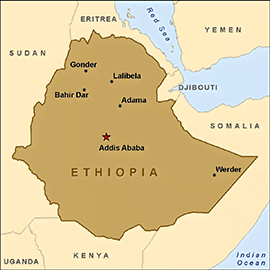 Zahara Jolie-Pitt, the adorable tot that Angelina Jolie rescued from an Ethiopian orphanage more than two years ago is now the center of an adoption controversy.

Zahara’s grandmother isn’t the only one involved in this latest controversy. Zahara’s biological aunt is also weighing in saying that she is upset that Jolie didn’t make sure the child’s paperwork was correct before adopting her. What’s more, both Zahara’s grandmother and aunt now want the actress to return the little girl to her homeland to be reunited with her biological mother and regain her identity.

Both women, who currently live in Africa, say they don’t have money to pursue their fight to have Zahara returned to them and her biological mother. However, they say they want people to know that they are the ones who raised Zahara and the adoption agency failed to gather accurate information about the child before allowing Jolie to leave the country with her.

Meanwhile, the orphanage claims it did not botch the adoption and according to their records, Zahara, who was close to death and riddled with disease when Jolie rescued her, does not have any living relatives besides her grandmother and a few aunts and uncles.

A source close to Jolie told a reporter for an entertainment magazine that the actress refuses to acknowledge the latest claims.

“[Angelina] believes that Zahara is an orphan and the woman who claims to be her mom is mistaken,” the source says.

Jolie’s pal adds: “Zahara was days away from death and Angelina saved that child. As far as she is concerned, that bonded her to that little girl forever.”

What do you make of the adoption controversy?