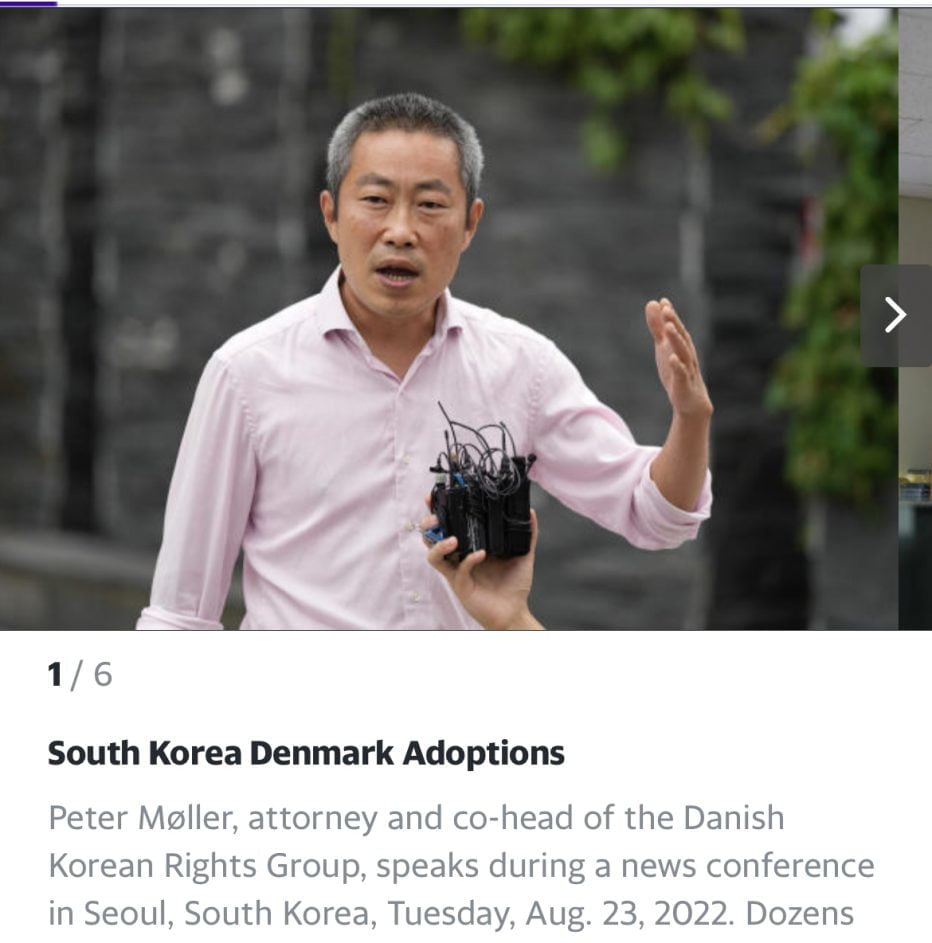 SEOUL, South Korea (AP) — Dozens of South Koreans adopted by Danish parents decades ago have formally demanded the South Korean government investigate their adoptions, which they say were marred by widespread practices that falsified or obscured children’s origins.

Most of the South Korean adoptees sent abroad were registered by agencies as legal orphans found abandoned on the streets, although they frequently had relatives who could be easily identified and found. This made the children more easily adoptable as agencies raced to send more kids to the West at faster speeds.

“None of us are orphans,” said Peter Møller, attorney, and co-head of the Danish Korean Rights Group, as he described the group’s members who filed the application.

“(In) a lot of papers, the Korean state at the time have stamped papers that say people were found on the streets. If you do a little bit of math, that would mean that from the 1970s and 1980s, Seoul would be flooded with baskets with children lying around in the streets. … Basements will be filled with lost child reports at police stations.” The story Continues here.

“As the French philosopher Simone Weil said: “You must know your past to understand your present and shape your future” Thousands of Korean children under the authoritarian rule of Korea were sent out as international adoptees. International adoption has been a taboo surrounded by dogmas, taboos, and narratives by the adoption’s many actors. For the adoptees themselves, international adoption is characterized by uncertainty for the unreconciled. For the Aggrieved, who have experienced violations of their human rights, uncertainty has been replaced by astonishment, anger, and bitterness. It is time for the truth about international adoption under authoritarian rule to come out. As adoptees, we demand to be told the truth about interactional so we can reconcile.”  Quote from the Truth and Reconciliation Commission.

Adopted from Korea? Visit this website. An instructional video explaining how to fill out the form.

Are adult adoptees from Europe, America, Asia, and Africa tired of being used by the evangelical pro-adoption establishment to force religious anti-abortion rhetoric? Subscribe if you are interested in hearing what adult adoptees are saying about the adoption experience based on the experience of having inherent human rights ignored by the adoption industry.

Co-founded by the Vance Twins

We remove the myths about adoption.

Adoption Truth and Transparency Worldwide Information Network (AT.TWIN) was initiated in 2011. We are a unique activist organization that uses various mediums to fulfill its mission to find resources, scrutinize, investigate, critique adoption policies and procedures, raise awareness, and share diverse adoption experiences. Simply put, our goal is to create a place that gives a well-rounded perspective on the adoption processes and policies. Members include domestic, late-discovery, transracial, internationally adopted people, and families separated by adoption, from every continent.