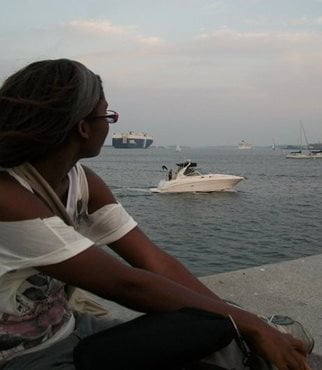 Mae was trafficked from Haiti by white adoptive parents who purchased a birth certificate of a deceased child. That birth certificate became her identity. Her earliest memory of Haiti was going to a vodoo ceremony when her new parents returned to complete the adoption. She also remembers falling off the bunk bed in her new home in Haiti, hitting her head, and her adoptive father using a “butterfly” stitch as a band aid.

Most of her memories come in the form of dreams; night-terrors and blissful times with her real mother who loved her dearly. Her memories of Haiti are few because she was taken at such a young age.

Returning to Haiti as an adult has been troublesome as her ability to speak the language was not encouraged as a child.

She feels her adoption did not have to happen. If her family was poor, and the adoption was in the best interest of the child, her adoptive parents should have provided for her family and helped keep them together. They should have sponsored instead of taken the child.

Mae’s mother was loving, kind, and intelligent…but she didn’t get a chance to show that side of her because when she searched for her for the last time, she was no longer there. She didn’t sign the adoption papers….another woman did. She never intended to give her child away.

Mae feels she spent over 18 years emotionally caged but she is now free.

She has reunited with her biological aunt, and two siblings who love her and spent their entire life wanting to be in her shoes. During the reunion Mae was able to explain to them how much she prayed to be in theirs.

Mae is a Haitian adoptee adopted by religious people. She is the author of six books including her newest release called Rainbows But Not Unicorns: My Adoption Truth. This particular book is unique because it includes an adult workbook which helps adoptive parents ask themselves the tough questions when it comes to raising adopted children. This book touches on race, religion, cultures, beliefs, ethics, morals, sexuality, abuse and so much more.

No one understands how we feel except for other adoptees. And no two stories are exactly alike. Mae works to bring awareness to adoptive parents about adoptive children’s feelings and experiences as they are raised in cultures that may not be their own.

“No adoption is the same but they all have loss at its root.

Rainbows But Not Unicorns

Adoption is complicated because it begins with loss. Like an onion, there are so many layers to peel back to get to the heart of each individual story. Children don’t ask to be adopted, nor do they ask to have their entire world turned upsidedown. Children don’t look through a catalog to choose their “perfect” family. Adoptive Parents do. Has your adoption journey been tough? Will there be a light at the end of it? A rainbow? A Unicorn? Did you drink the adoption KoolAid?

Mae’s online business Nooma Consulting: Understanding the Complexities of adoption functions as a resource for adoptive parents and adoptees alike. She helps adoptees all around the world find a voice and she teaches adoptive parents (via Facebook chats, phone and Skype consultations) how to give adoptees a voice in an AP driven corporation.

In her free time Mae loves to read, write and do crafts with her young daughter.

If you need advice, please schedule an appointment by calling (857) 207-8469 or visiting her Facebook page.

Join some of the Adoptionland contributors in the Adoption Truth and Transparency social media group.

For a copy of Adoptionland: From Orphans to Activists visit here.